LUCY DACUS - PILLAR OF TRUTH
THE MURDER OF JAMAL KHASHOGGI
This Saudi journalist, working for the Washington Post, and living in Turkey, was killed by Saudi agents and the president of the U.S. doesn’t feel as if he needs to hold Saudi Arabia responsible. When Trump continues to attack the press, calling it the enemy of the people, and accusing it of manufacturing fake news, it’s no surprise he’s balked at calling out the Crown Prince for his connection to Khashoggi’s death.

It’s amazing to see “a pillar of truth,” essential to a democracy, “turning to dust.”

This year California about burned itself off the map. While the smell and ash from the Woolsey fire drifted down to me, I wasn’t directly affected by it. But a woman I work with lost her family home and everything her parents owned. Our school came together to raise money in a big way to help them out.

This photo is hauntingly surreal and is burned into my memory. When I think of the fires this year, I think of this picture, and then, this song. I listened to survivors’ stories in horror as they described how they “[didn’t] know how to get out” then wondered “where are [we] going?”

Seventeen teenagers getting slaughtered at school hits me hard, especially considering I teach high school, as it should anyone. I used the resulting #NEVERAGAIN movement to teach my young students how to stand up to speak and fight and vote for what they believe in. Punk rock did that for me when I was their age, but not enough kids are refusing to fit within the system in productive ways.

CHARLES BRADLEY - “I FEEL A CHANGE”

More than 7,000 Central American migrants make their way to the U.S. border. They’re sacrificing everything they have to flee violence and corruption in their home countries. Many get held up in U.S. detention centers. Children are separated from their parents. Trump argues terrorists, murderers, and drug dealers are within the group. He sends troops down to the border. He demands Congress pay for his campaign slogan of building a wall…..(segue to next story)....

In this song I can hear the worries of the migrants as they leave their homes behind, “if you hope for better futures, let’s just try to keep going,” only to find themselves in border purgatory, “how long’s forever?”

...and when they don’t Trump partially shuts down the government, effectively slashing the incomes of hundreds of thousands Americans (my brother-in-law included). It’s the longest government shutdown ever. Trump suggests he may even declare a national emergency.

Bookending 2018 with a song that came out early in the year and matching it with news from the end of the year.

“He will certainly answer for all the blame / that’s formed as a cancer on the [country’s] brain / [He’s] torn off a future…….”

I’ve had to cut & paste a the nouns and pronouns a bit to make the lyrics fit, but the title for sure fits as Trump continues to slash at America’s, and the world’s, psyche. Hopefully better days are near…. 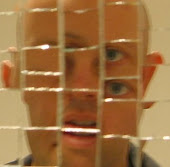